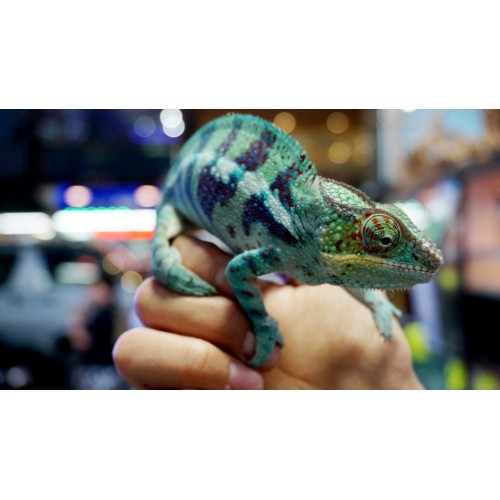 The panther chameleon (Furcifer pardalis) is a species of chameleon found in the eastern and northern parts of Madagascar in a tropical forest biome. Additionally, it has been introduced to Réunion and Mauritius.

Male panther chameleons can grow up to 20 inches in length, with a typical length of around 17 in (45 cm). Females are smaller, at about half the size. In a form of sexual dimorphism, males are more vibrantly colored than the females. Coloration varies with location, and the different color patterns of panther chameleons are commonly referred to as 'locales', which are named after the geographical location in which they are found. Panther chameleons from the areas of Nosy Be, Ankify, and Ambanja are typically a vibrant blue, while those from Antsiranana and Sambava are red, green or orange. The areas of Maroantsetra and Tamatave yield primarily red specimens. Numerous other color phases, and patterns occur between and within regions. Females generally remain tan and brown with hints of pink, peach, or bright orange, no matter where they are found, but there are slight differences in patterns and colors among the different color phases.

It is a common misconception that chameleons of any kind can change colour to match any colour of their environments. All chameleons have a natural colour range with which they are born, and is dictated by their species. Colour change is, for the most part, subconscious. It is affected by temperature, mood, and light. If, for example, the colour purple is not within the range of colours to which their particular species can change, then they will never turn purple.

Like most species of chameleons, the panther chameleon is very territorial. It spends the majority of its life in isolation, apart from mating sessions. When two males come into contact, they will change color and inflate their bodies, attempting to assert their dominance. Often these battles end at this stage, with the loser retreating, turning drab and dark colors. Occasionally, the displays result in physical combat if neither contender backs down.