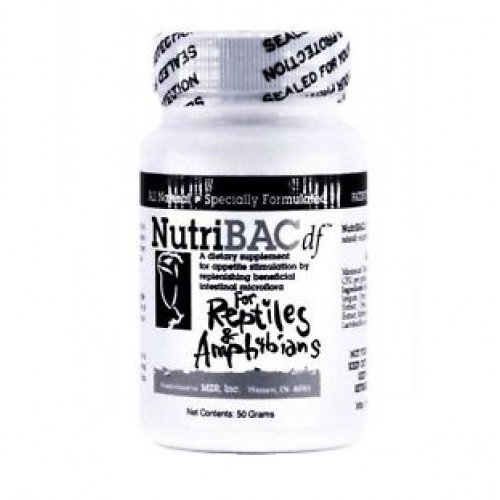 The NutriBac product contains 7 different micro organisms that are SUPPOSED to be in reptile's guts, but may be low or missing for some reason (stress, medications, diseases, etc). When the "good guy bacteria" are missing, then the "bad guys" that are normally there in low numbers (such as Salmonella, for instance) can multiply to unusually high numbers. In their usual low numbers, germs such as Salmonella are normally harmless to herps, but if they grow unchecked, they can cause disease too. That is how the NutriBac works, and if that is the problem, it should prove helpful. But if there is another kind of problem, it may not help at all. I have personally used it with a few regurgers that I was ready to euthanize, and brought them back from the brink of death. But in other cases, it didn't help much. The good news is that at least it can't hurt, since it is only the natural organisms that are already supposed to be there anyway.

It is a very fine powder that can be used several ways. I have dusted the back end of pinkies with it for snakes that are having mild problems, or just as a preventative. Most snakes ate it ok, but some of the less greedy feeders did not take them. I also have mixed the powder with water and injected into pinks or other mice before feeding. But the snakes that were in really bad shape were not holding anything down at all. So I mixed about 1/2 teaspoon or so (for yearling corns) in some water and tube fed it to a couple of snakes about twice per week for a week or two. Then I started mixing a little canned cat food into the mix. After about a month of that, I started feeding the yearlings little pinkie mice a couple of times per week. Then graduated slowly to larger mice. That was last winter. Now they look great and are eating weaned mice.

As you can see, it is more of an art than science. You have to gauge the severity of the problem in your animal, then adjust treatment accordingly. The NutriBac should last a long time IF you keep it cool, and VERY DRY. So I look at it as a first defense against any digestion problems, but not necessarily a cure-all that takes the place of every other treatment.

The term probiotic, often used interchangeably with the term direct-fed-microbial, is self-defined. In general terms "probiotic" means "for life" and "direct-fed-microbial" or DFM means a microbial (preferably a live microorganism) that is fed directly to the reptile to benefit the intestinal environment of that particular species being fed.

These microorganisms should be non-pathogenic in nature and comprised of many different organisms geared toward the well-being of the particular species. They should create an environment in the intestinal tract of a reptile that is favorable to the animal, yet hostile to pathogens (disease-causing agents).

Why do reptiles need probiotics or DFMs?

Antibiotics have been a valuable tool against certain diseases. Unfortunately, some pathogens, such as Salmonella, are resistant to their capabilities to prevent or cure disease. Because of the indiscriminate nature of some antibiotics they will destroy both "bad" and "good" bacteria. Since the bacteria "war" is a numbers game, it is important that the "good" bacteria always outnumber the "bad" bacteria.

Feeding a probiotic or DFM specially formulated for reptiles can help insure this replenishing of "good" bacteria. Since all animals can experience stress and pathogens take advantage of stressful situations it is crucial that there are fewer numbers of these potential pathogens in the gut of the animal. There is also the concern of zoonoses.

Zoonoses is the transmission of diseases from animals to humans. The most recognized zoonoses is salmonellosis. The ever-increasing popularity of exotic pets, such as reptiles, has brought to the forefront the zoonotic concern.

Can the right probiotic or DFM prevent zoonoses?

It is commonly understood and has been shown that a single DFM, such as found in yogurt, is not as effective as a combination, such as is found in NutriBAC df.

NutriBAC df can be considered a management tool to help the herpetoculturist or collector in managing for the well-being of their reptile. A concentrated effort on the part of the reptile owner must include both the internal and external environment of the animal.

The internal environment of the animal can include the digestive tract. Even though, seemingly healthy animals may harbor potential pathogens, the key to a healthy animal is a healthy gut. The more disease-free an animal's environment, the less likely of zoonoses to occur.